Specializing in the health of women and children.

Healthy-weight women who gained weight between their first and second pregnancies—even as little as 12 pounds for someone of average height—had an increased risk of a stillbirth or their baby dying within the first year of life, compared with women whose weight remained stable, according to a Swedish study.

The new study, based on a database of more than 456,000 Swedish women and published in the U.K. medical journal the Lancet, is thought to be the first to examine how weight gain between pregnancies is connected to risk of infant death. It suggests that weight gain during this period may be a modifiable risk for reducing stillbirth and infant mortality, which researchers say hasn’t declined much in recent decades in many high-income countries. 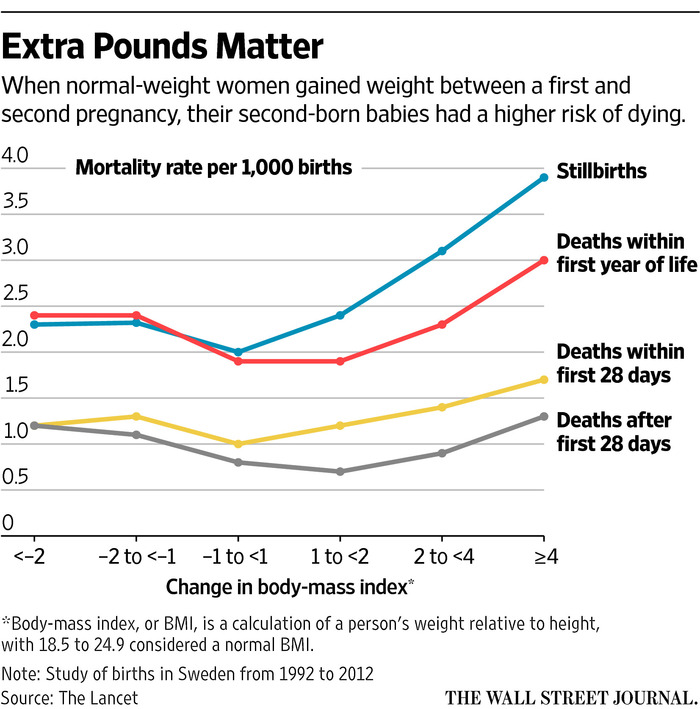 Women who were already overweight, whose babies are known to have an elevated risk of both outcomes to begin, didn’t have a greater risk with respect to infant mortality. But overweight women who lost weight between pregnancies reduced the risk of neonatal mortality—their baby dying in the first 28 days of life—for their second babies, according to the study.

“From a public-health perspective, it is possible that lives could be saved if we lived in the ideal world and you go back to your ideal weight,” said Sven Cnattingius, a professor in reproductive epidemiology at the Karolinska Institute in Sweden and first author on the study.

About half of the women in the study kept their weight steady between pregnancies, while about 20% put on the amount of weight associated with increased risks to the baby, according to Dr. Cnattingius.

Lesley McCowan, a professor of obstetrics and gynecology at the University of Auckland in New Zealand, who wasn’t involved with the study but wrote a commentary to accompany it, called the paper “clearly important because it’s putting an emphasis on lifestyle issues between pregnancy.”

Other experts called the new research high-quality, but also cautioned that the findings don’t show causation. The researchers controlled for some variables that can be related to pregnancy complications, such as maternal age, smoking and education level, but acknowledge there could be other factors they didn’t account for in their analyses.

Experts don’t understand well why some women are likely to retain weight but “the more you gain during pregnancy the harder it is to lose that weight,” said Dr. McCowan.

The U.S.’s Institute of Medicine recommends that normal-weight women gain 25 to 35 pounds during pregnancy, and that overweight or obese women gain less.

Dr. Cnattingius and his team are now looking at interpregnancy weight gain as a risk factor for other infant health problems, such as severe asphyxia disorders.

The pursuit of educating and empowering women to make the choices that put themselves and their children's health above all else.
Learn More